On 5 January 2011, Genoa CFC had concluded an agreement with AC Sparta Praha for the permanent transfer of the player Juraj Kucka. Under the terms of this transfer agreement in the event that Genoa had transferred “the economic and performance rights” of the player to a third club for an amount greater than the transfer fee agreed with AC Sparta Praha, Genoa would have been be required to pay 15% of this excess.

In August 2011, Genoa wished to enter into a “sharing agreement” (“accordo di partecipazione”, colloquially known as “comproprietà”) with another club in relation to the player Kucka. Under the then applicable rules of the Italian FA, this agreement required the player to be transferred permanently with a simultaneous transfer of 50% of the “economic rights” back to the original club (the comproprietà has been abolished by the FIGC at the beginning of the 2014/2015 football season). The relevant rules also stipulated that the transfer of the 50% of the economic rights had to be effected at exactly 50% of the amount agreed for the permanent transfer. Such a sharing agreement could last up to one year, at which point the new club could either reacquire the 50% of the economic rights it transferred, or the position could be completely unwound with the player going back to the original club.

Genoa therefore entered into this sharing agreement with the player being transferred to fellow Italian club Inter Milan, at an agreed transfer amount. Simultaneously, Inter Milan transferred back to Genoa 50% of the player’s economic rights for 50% of the agreed transfer amount. On the same date of the transfer, Kucka was also loaned back to Genoa, and in effect never left his club of origin and never played for Inter Milan.

Given that the Player had initially been transferred to Inter Milan through the sharing agreement, ACSparta Praha claimed the contractually agreed sell-on fee on such transfer. Genoa did not view the sharing agreement transactions with Inter Milan as a permanent transfer, but as a way of minimising the financial risks in connection with the development of the Player. Financially, the net effect of all of these transactions resulted in a small gain to Genoa, lower than the transfer amount originally agreed with AC Sparta Praha.

The case was initially brought by AC Sparta Praha before FIFA, where Genoa argued that there was no permanent transfer as they retained 50% of the economic rights. The Single Judge of the FIFA Players’ Status Committee decided, however, that the initial transfer from Genoa to Inter Milan constituted a permanent transfer of the “federative and economic rights”, even though 50% of the economic rights were simultaneously transferred back. The Single Judge then considered whether a sell on fee would be payable, and if so how much, and decided that the amount due should be calculated on the total value of the entire transaction relating to the transfer of the Player. He did not take into account the fact that Genoa immediately undertook to pay 50% of this total amount for the 50% of the economic rights. Financially, this decision resulted in a very detrimental situation for Genoa.

Genoa appealed the FIFA decision at CAS. Following the arguments brought forward by Lombardi Associates, the CAS Panel found that the sharing agreement is not the same as a typical permanent transfer and warranted further examination. If the parties had wanted a straightforward permanent transfer, the Panel observed, they would have concluded an agreement to that effect. Instead, they found that the sharing agreement cannot be regarded as two separate agreements, and the transfer with simultaneous transfer back of 50% participation must be regarded as a combination of simultaneously concluded agreements. The CAS Panel found that there was a definitive transfer of sporting rights and so the Player was permanently transferred from Genoa to Inter. As there was a transfer of 50% of the economic rights from Genoa to Inter, the judges noted that for the sell-on fee to be triggered, it was not necessary for 100% of the economic rights to be transferred. Even a portion of economic rights would suffice.

After establishing that a definitive transfer took place, CAS considered whether a sell-on fee would be due, and if so how much. In consideration of the value of this transfer they referenced another CAS case (CAS 2012/A/2875) in which the Panel had found that sell-on fees should be based on amounts actually received for the transfer of a player, and not on initially agreed (“fictitious”) amounts. Thus, in this case, where Inter Milan paid Genoa an amount for the transfer of the Player’s registration, and Genoa simultaneously paid Inter 50% of that amount in exchange for 50% economic rights, the value of the transaction is the net amount. And it is this net amount that should be used in the calculation of any sell-on fee.

The appeal, therefore, was successful for Genoa and Lombardi Associates as the CAS Panel agreed that the transfer with participation is more complicated than a straightforward permanent transfer, even though the Panel did confirm that a transfer had taken place. As a result, the amount that Genoa had to pay to Sparta under the sell-on clause was greatly reduced as it was calculated on the net amount received. 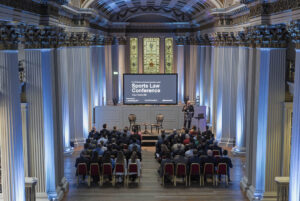 On Friday 7 October 2022 we were delighted to partner with the WS Society on the Sports Law Conference, which was held at the Signet